November 12, 2010 – Darien’s culinary landscape has been changing lately – for the better. And the convivial Scena Wine Bar & Restaurant, a creation of the Siguenza brothers, Vicente and Kleber, who also own Cava in New Canaan and 55 Degrees in Fairfield, fits right into the general upswing.

Scena is indeed a “scene,” lively, bustling and – because of the hardwood floors – noisy.

A compact northern Italian menu offers considerable appeal and is executed with solid professional know-how. A delicious appetizer of crispy fried artichokes, which came with goat cheese, arugula and pumpkin seed pesto, was a light and enticing way to begin dinner. I was also drawn to a starter special of sautéed squash blossoms stuffed with ricotta. There were only three blossoms (at $11), but they were delicious – crunchy on the outside, sweet and ethereal within

Seven pasta dishes, made from scratch, are Scena’s pride and joy. I especially liked the shell-like cavatelli with charred octopus, olives, tomatoes and guanciale (pork cheeks), and the long, flat tagliatelle with broccoli rabe, basil pesto, parmesan and house-made fennel sausage. But don’t overlook the other entrees. The chicken Milanese was crisply battered and buttery, and the seared sea scallops, tender and lightly browned, were served with cauliflower ravioli, a generous portion of fresh lobster, toasted almonds and charred green beans.

Even desserts shine at Scena, notably a satin-smooth lemon panna cotta, embellished with polenta shortbread and Chantilly cream, and one of the most luscious tiramisus I’ve had in years.

The air in Scena hints of the wood-smokiness of a pizza oven, and there are five pizzas on the menu. Our table ordered two. The crust in both cases was mundane, but the toppings – mushroom (with portobellos, garlic, fontina and walnut pesto) and spicy sausage (tomato, piquillo peppers, mozzarella and green olives) – were appealing.

Lunch at Scena is as compelling as dinner and considerably quieter. It also features a special wallet-pleaser: three courses for a prix fixe $18. There was a choice of three starters, and my table delighted in each: a refreshing fig and arugula salad (with radicchio, red onion, pecorino and saba vinegar); lentil soup resonating with smoky bacon and garlicky croutons; and the above-mentioned crispy artichokes.

One of the lunch entrees was perfectly cooked roasted salmon, served with beet salad, herb pesto, red onion and orange segments. Grilled salmon, a dinner entree, was even better because of its accompaniment of artichoke risotto, which was seductive perfection.

In several visits to Scena I found very little to complain about. There was an omission – grilled calamari arrived with a pleasing salad of white beans, enlivened by lemon and parsley, but the beans were not the white bean hummus promised on the menu – as well as a few extra touches that were meant to be creative but were mere distractions. For instance, a superbly cooked duck breast came with tasty, sautéed escarole and corn-goat cheese crespelle. A grilled peach, part of the entourage, lacked flavor and was unnecessary.

Two twists of tough pizza bread, accompanying an excellent spicy salmon tartare (teased with lemon and jalapeño), were superfluous. The salmon (with arugula) was a pleasure by itself. Like so much at Scena, it was just as it should be and didn’t need enhancing.

September 18, 2010 – Darien was all abuzz last year when word got out that Vicente and Kleber Siguenza, the brothers from Cava Wine Bar & Restaurant in New Canaan, would be opening another restaurant in downtown Darien. Rumors spread throughout the renovation phase, with most of the work confined to the inside and little or no information released about a potential opening date. Then, on Sept. 1, Scena Wine Bar & Restaurant made its quiet but impressive debut.

“Scena” in Italian refers to a scene in an opera, and true to that name, this restaurant entertains. The boxy space-formerly The Loft clothing shop-has been transformed into a sophisticated dining room and bar, complete with a gorgeous wood-fired oven set against a stately stone wall backdrop. The kitchen is slightly on display, with just a side glimpse into Chef Eben Leonard’s food preparation. Leonard, a former Todd English pupil, is no stranger to opening Italian inspired restaurants and creating menus. While the lineup at Scena largely mirrors that of older sibling Cava, Leonard has injected his own style into the new menu, bringing a broad array of flavors, seasonal ingredients, and great attention to quality.

I arrived early on a Friday night while the staff was just finishing up the outdoor patio setup, which adds a certain charm to the street. Inside, I was greeted with smiles and instantly taken by the space. A square room can be challenging to work with, as it provides little opportunity to create depth. That test is met beautifully with tall banquette seating lining the perimeter and dividing the bar and dining room. Wood flooring and dark furnishings are offset by beige seat cushions, white table linen, and earth tone fabric. High-top tables surround the bar, which is itself an inviting place to sit and watch pizzas being prepared.

General Manager Marco poured me a glass of the Argiano Super Tuscan, one of many quality wines offered by the glass ($7-$13). Antipasti ($9-$12) selections include roasted wild mushroom with crispy polenta, spinach, parmesan, and a soft poached egg; steak tartare with truffle vinaigrette, charred onion salad and quail egg; and grilled calamari with white bean hummus, cherry peppers, parsley and lemon. I opted for the fig & arugula salad. Fresh peppery arugula and radicchio are tossed with slivered red onions and tossed with just a hint of olive oil and balsamic vinegar. The salad lies over paper thin slices of prosciutto and is topped with shaved parmesan and sweet fresh figs. This dish is only as good as the freshness of its ingredients, which in this case are in peak season.

I’m tempted to indulge in one of the wood-fired pizzas ($12-$17), which include a bacon-and-egg creation of pancetta, tomato, percorino, and a sunny-side-up egg, as well as a decadent prosciutto pizza with fontina, taleggio, and parmesan cheese accented by a drizzle of white truffle oil.

Instead I go for the house made pastas ($17-$25). The gentleman seated next to me raved about the “light-as-air gnocchi with bolognese,” and the lamb ravioli with chickpeas, tomato, cherry peppers, mint, and toasted garlic sounded like an incredible combination of flavors and textures. Chef Leonard pointed me in the direction of the cavatelli with charred octopus, which is prepared with guanciale (pig jowl), green olives, and fresh cherry tomatoes. The octopus was tender with an outer layer of slightly crisp, smoky goodness. The guanciale was likened to that of pancetta, diced and sautéed into the sauce in this case, adding another layer of smokiness and richness. Slivers of briny olives and fresh sweet tomatoes rounded out the sauce.

Entrees ($22-$30) cover land and sea. Torn between the seafood pan roast of lobster, shrimp, scallops, and clams cooked in a white wine tomato bath and served with herb risotto or the veal Milanese topped with roasted beets, toasted hazelnuts, orange sections, baby arugula, and parmesan, I finally decided on the chicken. That’s right: the chicken.

Oh, but this is no ordinary chicken. It’s a wood-fire roasted free range chicken prepared bone-in-its skin seared to a crisp-and enhanced with pork sausage, shitake mushrooms, hot peppers, buttery mashed potatoes, and garlicky spinach. The pan drippings are made into a light sauce, just enough to add another flavor element but not take away from each component. I searched my Food Lover’s Companion resource book to find the words to describe this dish, but fancy words don’t do it justice. Simply put, it’s juicy, rich, flavorful, and warming to the eyes, taste buds, and stomach. True comfort food, but refined.

I didn’t leave enough room for dessert (shame on me) but it didn’t stop this girl from looking. House made desserts include tiramisu presented parfait style; Nutella crepes for the kid in all of us; lemon panna cotta; and a seasonal fruit and cheese plate.

The restaurant filled up over the course of the hour I was there. Though I wouldn’t recommend it as a place to bring children, it attracted a wonderful mix of people, and the smiling staff didn’t miss a beat. Who can blame them: Scena Wine Bar & Restaurant offers plenty to smile about. 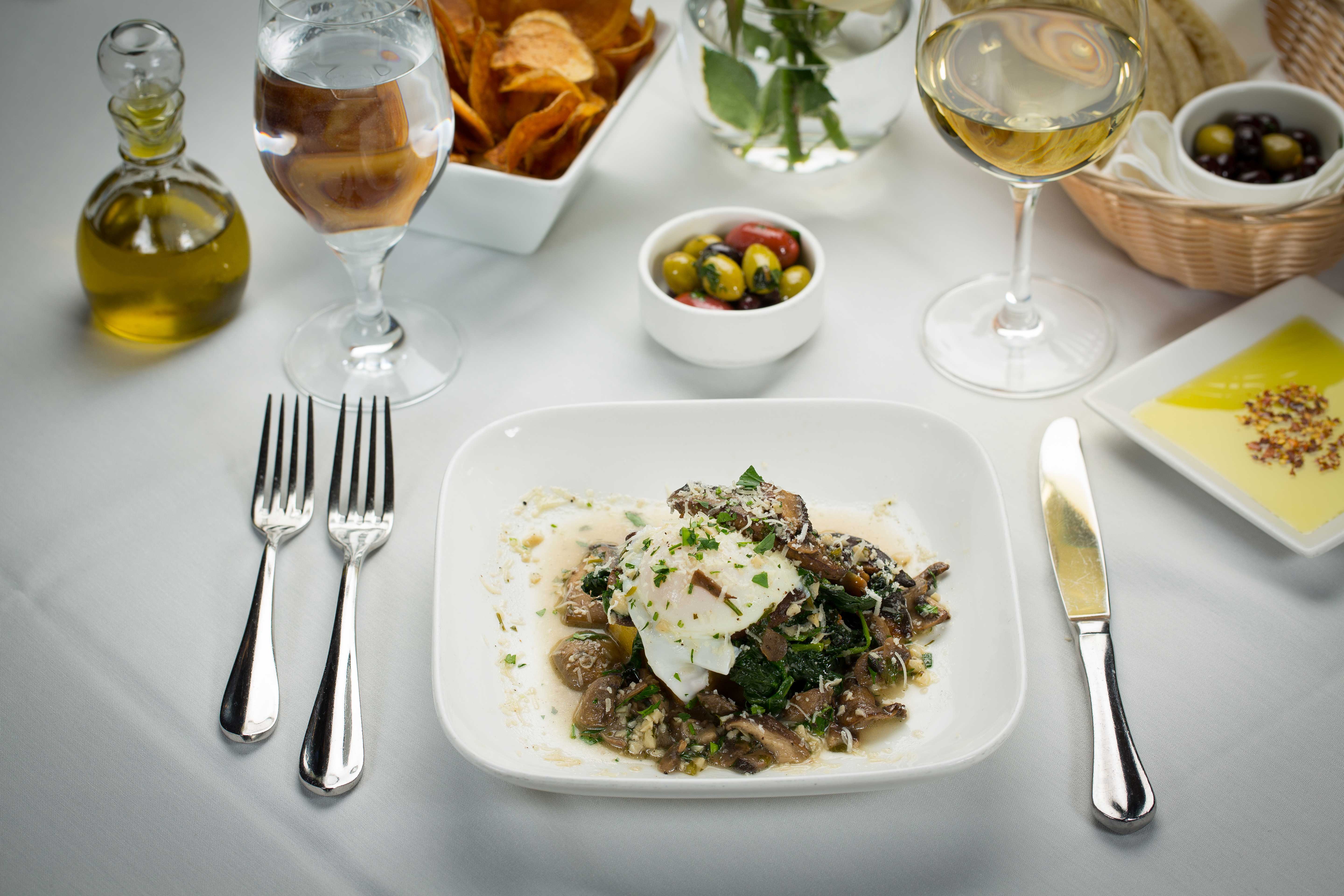